Tonight black hat project journey lead to more exploring and testing with the Arduino micro processor I'd like to add to my Black Hat project ~ The  Light Blue Bean.

I had previously installed the software on my Mac and was successful in using bluetooth to communicate with the Bean from my Mac.  I used the simple Blink code and was able to change the blinking patterns of the onboard LED.   The only trouble I rant into was that my Arduino version was a bit outdated, but after an update, all worked fine.

But I ran into erratic behavior when trying to control the BEAN using Bean Loader for  IOS.
After a little digging on line, I found I was not the only one with erratic issues.
Decided not to worry so much about that for now and to keep exploring.

I was  successful in using the TickleApp on my iPad to communicate with the Bean.  Loved the idea of being able to use this interface for coding and introducing the power or Arduino using Tickle.

Since soldering LED's to those pins was not going to be conducive to the prototyping I needed to do, and the holes were too tiny and close together to use alligator clip,  my husband suggested soldering on a breakaway header male pins to the Beans first row so I could easily use male/female jumper cables to prototype. 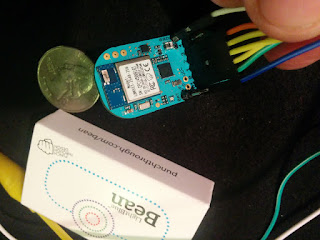 What a great idea that was.   It also gave me some much needed soldering practice.

With my modified Bean in place I started to prototype.

I begin by skimming through the sample projects on the Bean's LEARN page and found that the Death Star project was the most accessible for me.  It very closely resembled the Santa Hat project I created last year (blinking lights and a Piezo speaker playing Jingle Bells music  with a tilt sensor).

I followed the instruction and wired up a Piezo speaker and one LED to the Bean,  copied the sample Code into my Arduino IDE, uploaded it using Bean Loader and crossed my fingers.  As soon as I moved the Bean around I got LIGHTS and SOUND!  SUCCESS! 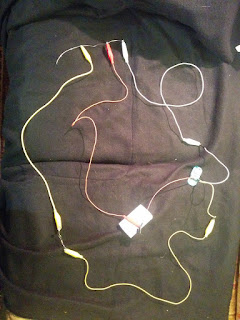 Next question -- How many LED will the BEAN support as is. I added another LED to PIN 4, modified the code.  NOTHING!

After a bit more exploring I decided to remove all variables,  simplify the code by going back to the EXAMPLE BLINK CODE provided with the BEAN.  Note -  not the Arduino standard BLINK CODE, but the specific BEAN BLINK example.

But I am pleased to report that the BEAN  successfully powered 7 LEDs hooked up to each of the first row of pins, and I suspect that a little solder repair will bump that up to 8 no problem.
Not bad for one little coin celled battery.  Note:  as recommended in the Death Star instruction I used a 10 Ohm resistor on each LED.  Here's a tour of  the BEAN lighting 7 LEDs using a coin cell battery. 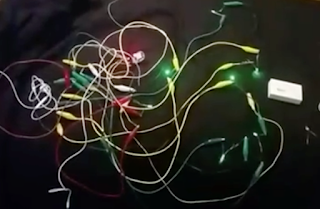 Posted by Lucie deLaBruere at 7:48 AM